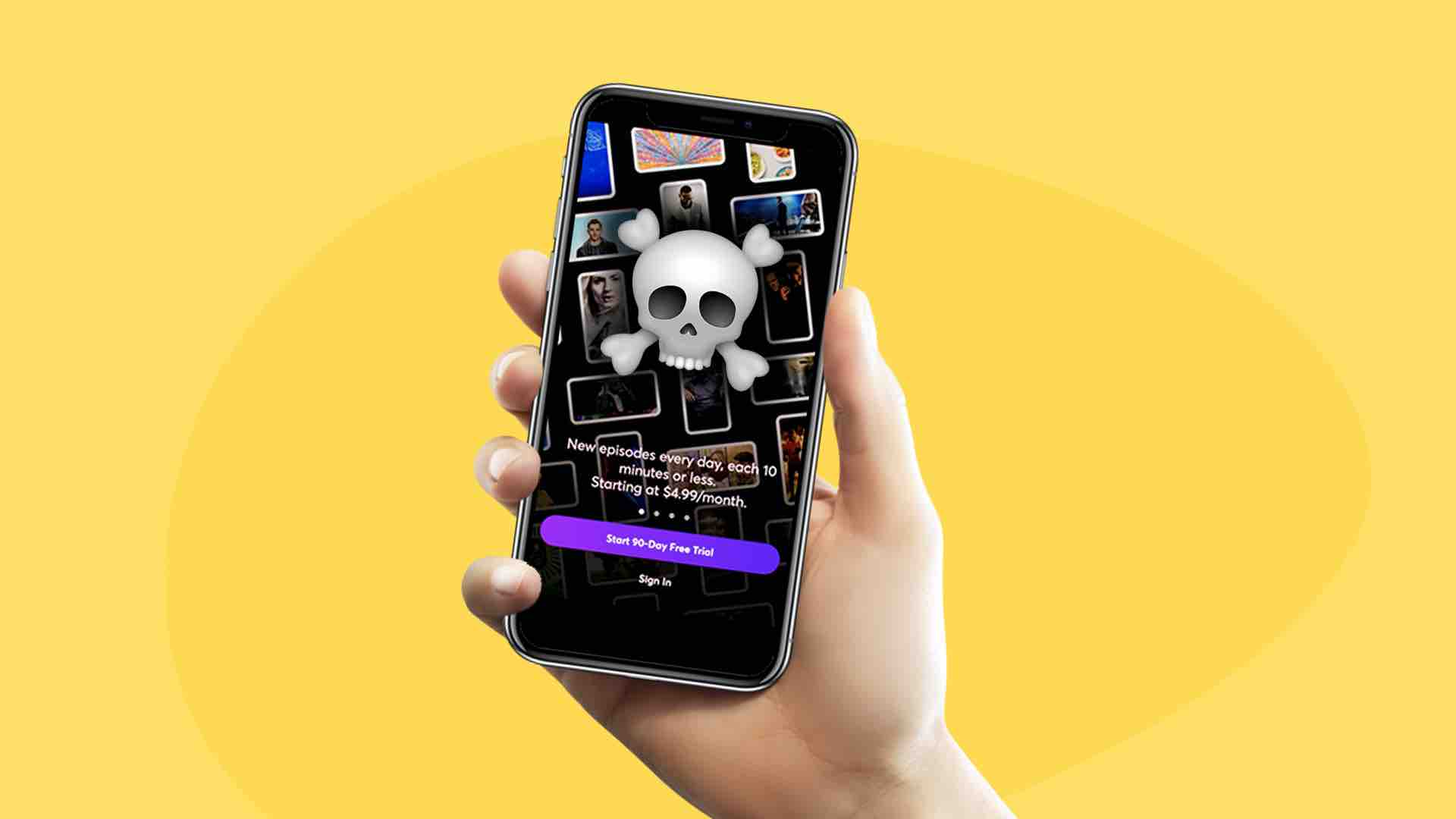 What do you need to compete with Youtube or Instagram, in the market of casual video streaming, and at the same time compete with Netflix or HBO, in producing premium series and movies?

Well, let's say you will need at the very least two things. First, money. A lot of it. And then maybe something unique, something that truly stands out.

Quibi is the video streaming app that went just for that earlier this year, and it has been struggling to claim a place on the market. Yes, the money part they had. But the unique-factor, which they also claim to have, let's say it's very debatable.

We will talk about Quibi in this Company Forensics and determine if this high-profile startup is as doomed as it looks to be.

"Dumbest thing to ever cost a billion dollars."

Those are not our words. That's actually how Jimmy Kimmel referred to Quibi in a joke he did at the Emmys ceremony this year. Just like any other joke, it may hide some degree of truth.

Quibi has indeed raised almost $2 billion now, from two private equity rounds of investment. Big money from some of the leading Hollywood studios like Sony Pictures, NBCUniversal, or internet giants like the Asian Alibaba.

But Kimmel's joke was also about the whole concept of Quibi being somewhat dumb, or unnecessary. So, what's supposed to be so special about it after all?

Quibi stands for "quick-bites" of video content. It has a library with dozens of original shows in a short format, all stuffed with countless celebrity appearances, and delivered in short chapters never longer than ten minutes.

According to them, they are going after a portion of the market that no one else is catering to. The app is for viewing exclusively on phones and on-the-go, to give you something to fill up those in-between moments of your day.

High-value productions served in ten-minute pieces for watching while riding the metro or waiting for your coffee. But this on-the-go exclusive spirit ended up limiting the user experience.

Forget about any fancy screen you may have at home, for viewing with family or a friend. Quibi didn't allow for any sharing of the content: no screenshots, no casting to your TV, no memes, no hashtags, no nothing. Just you and your phone.

Somehow, Quibi still claimed all this to be a revolution of video consumption in phones, but it's more like they had never used Youtube or Instagram before.
‍

They have said that they don't compete with those companies because they tackle a different use case. But the differentiator doesn't seem to be enough to make Quibi a thing of its own.
‍

The video streaming market is pretty saturated in all forms, and there is only so much money that people are willing to spend on their video streaming services. And Quibi is charging $5 a month for a subscription with ads, or $8 a month to be ad-free. That price competes with services like Netflix, which offers thousands of titles and fewer restrictions.‍

Another big problem for this on-the-go nature of Quibi is that people have never been less on-the-go than in 2020. Different US states and cities worldwide have been locking citizens down in their homes to prevent a more exponential growth of the COVID-19 pandemic.

Yeah, talk about bad timing to release a video revolution all based on a moving experience. Quibi launched on April 6 this year, when the pandemic's impact was unfolding, and more people started spending more time at home for the following months.

Still, the app reported 1.7 million downloads in the first week, but that growth pace soon started to slow down significantly, and they are painfully falling short of their goals now.

They had to bend some of their original rules and allow things like casting to some TV screens or take screenshots, but it may have been late. A couple of months after the app release, Meg Whitman, Quibi's CEO, said on CNBC:

"We had always planned to be able to cast to your TV, so we're going to see if we can accelerate that in the engineering roadmap (...) We'll eventually get there, but it was never a part of the launch. If we had known about COVID, maybe it would have been."
‍

The co-founder, Jeffrey Katzenberg, has gone further and he straight-up blames the pandemic for Quibi's poor performance. The NY Times asked him if he wished to have launched Quibi at a different time, and this was his reply:

"If we knew on March 1, which is when we had to make the call, what we know today, you would say that is not a good idea (...) The answer is, it's regrettable. But we are making enough gold out of hay here that I don't regret it."

It's hard to imagine a product with such money and production behind that relies so heavily on one experience and fails in the rest of possible scenarios.

Another of Quibi's supposed distinctions from competitors, it's the so-called Turnstyle technology. It allows viewers to seamlessly switch the phone screen from vertical to landscape, getting a different view angle on each.

When you're watching vertically is like closing up or cropping the image, and when you go horizontal, you see the regular landscape frame.

But Quibi can't rely only on the Turnstyle feature or the short video format to succeed. That won't move the masses. So, they turned to celebrities. Any celebrity you can think of.

No, it's not the guest list of a red carpet ceremony; it's only a few of the personalities that have their series or a featuring in a Quibi show. The shows can be a "movie in chapters," which is just a movie broken into ten-minute-chunks, with ads in between.

Also, documentary-type shows and other unscripted series like realities or prank shows. Or finally, "Daily Essentials," which are more informative and lifestyle programs.

Then comes the 1.8 billion dollar question: are the shows any good? You can now check out many trailers, some loose chapters that are now available on Youtube, as well as many reviews, and we can say that results are, at the very least, mixed.

Sure, some movies or series may look interesting and could have potential but are nothing much different from what you can watch on HBO or Hulu, where you don't have to watch exclusively on your phone or into ten-minute-chapters.

And some of the more casual, reality-type shows can end up looking cheap and cringe at times. Without getting into many details, here are just a couple of synopsis.

Take, for example, "Dishmantled," where food is blasted with cannons, all over some blindfolded chefs that need to pick it up from the floor and walls, looking miserable while doing so, try the food, and then cook something with the ingredients they tasted from the mess.

Or the one named "Thanks a million," where many millionaire celebrities split one million dollars into ten, giving away $100K on each episode.

But it has a catch: the lucky person who gets the $100K has to give half of it to another person, starting what they call an ongoing gifting chain until all the money is handed. I can't help but wonder how the last one in the chain feels.

Or finally, things like Nikki Fre$h, where Nicole Richie is a trap singer with a twist: it may sound like she could be singing about drugs in the club, but it's all about education and woke lyrics instead. At times it's just hard to tell where the joke is, or if it is any joke.

Maybe the shows are good, but some of them make Quibi feel like a desperate attempt to twist things, just because. And that can easily end up being tasteless.

Two veteran CEOs against the odds

Behind Quibi are two experienced CEOs: Meg Whitman and Jeffrey Katzenberg. She is, among other things, the CEO responsible for growing eBay into what it is today. He is a former Walt Disney Studios producer and co-founder of DreamWorks Studios. And together, they are a dreamed crossroad of Hollywood and Silicon Valley.

The two veterans are no new to overcoming steep challenges and have remained confident about Quibi's future, although the numbers paint a harsh reality for the company.

They are going after an audience half their age, and they think they know what this audience wants. But they may be getting a reality check.

Looking at the pitch deck Quibi used to raise billions, you see that they are now heading towards the worst-case scenario forecasted in terms of paid subscribers.

Of course, that directly impacts the money Quibi can spend on producing content, and that could put everything at risk. For reference, one minute of a Quibi super-production can cost around $125K. Other, less premium shows can cost around $10K and $20K per minute.

According to a Bloomberg report, based on these figures, marketing costs, advertising revenue, and subscriber mix, Quibi is en route to burn its cash balance in 2021 and will need to raise another $1.8 billion by 2024.

That should be worrisome, and it's probably the reason why they are now exploring so-called strategic opportunities, including a sale of the company or raising more money with an IPO and going public in the stock market, according to many sources.

It seems now that the company will require miraculous adjustments or some emergency protocols if it wants to compete with the video streaming giants.

Now, the question is: will Quibi survive? What do you think?