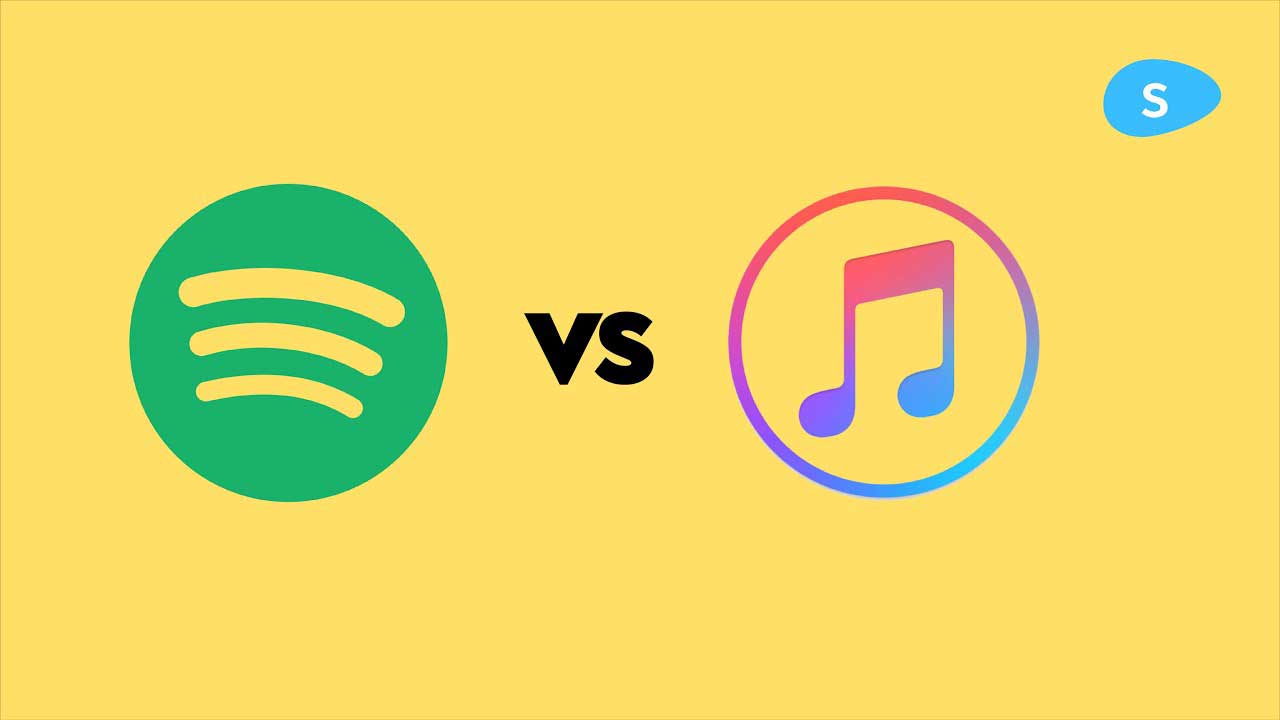 In life, there are some hard questions, like Pepsi or Coke, iPhone or Android, Mac or PC, but when it comes to music and podcasts, it seems the answer is clear: Spotify is king.

How did this small company beat out giants like Apple at their own game?

In 2006, back when listening to music was either expensive or illegal, Swedish entrepreneurs Daniel Ek and Martin Lorentzon wanted to make music more accessible, through streaming. So, Spotify was born.

But they needed to have the record labels on their side. Otherwise, the app would have very little to offer. Fortunately, the music industry also needed to shed the vestiges of the past.

Ek asked the labels to open up, and they did, at a price. By 2009, multiple record labels owned 20% of the company, but for Spotify, this meant money and the guarantee that Spotify would have mainstream music.

They launched in 2008, with both a free service and a paid subscription. But Spotify got their big boost in 2009 when none other than Mark Zuckerberg updated his Facebook status with: Spotify is so good.

At that time, Spotify wasn't even available in the US. Talk about hype. Li Ka-Shing, one of Facebook's leading investors, had his eyes set on the app, and Zuckerberg was trying to venture into music.

Spotify finally launched in the US in 2011, but with reduced features for free users.

You see, the four major labels in the US believed in Spotify. But they wanted it to be solely for paid users in the US, which wasn't feasible in Spotify's view. The company took to other strategies, such as integration with Facebook, as people could now use their profiles to create Spotify accounts in seconds.

However, competition in the US was fierce, with software like Pandora, Rhapsody, and Last.fm.

Let's take Pandora. It was a free music-streaming service that relied heavily on ads. Spotify, on the other hand, offered a paid membership, which eliminated all ads.

Behind plenty of features and a smooth, engaging platform, was Ek's obsession with excellence. He wanted the best listening experience, to convince users to pay the monthly $10.

After all, that's how he had gotten 1 million paying subscribers by March 2011. He aimed to replicate that success in the US. While ad-free music is the best music, Spotify also offered more mobile tools like playlists and storing songs, which Pandora didn't.

The US loved it. The app went from 1 million paying users in March of 2011 to 2 million by September of that year.

The brand also became a staple in American culture. Barack Obama launched his playlist before the 2012 elections.

Coca Cola partnered with the giant, and even Metallica launched its entire catalog on Spotify. All of this meant that by December of 2012, Spotify already had 1 million paying subscribers in the US alone.

But democratizing music, as Ek once said, wasn't a smooth ride, especially for artists. You see, Spotify pays the owner of the rights $0.006 to $0.0084 per play. The owner then splits up the money between the label, artists, producers, etc.

Artists didn't like that. In 2011, Adele and Spotify couldn't agree on the release of her album "21", so the singer chose Rhapsody instead, exclusively for paying subscribers.

Other big names like Tool and Thom Yorke, have criticized Spotify for weakening the already bleak opportunities artists have. Just to earn approximately minimum wage, an artist would need 400 000 streams per month.

Perhaps the biggest feud was with Taylor Swift. In 2014, she didn't release her album 1989 on Spotify, then removed her entire catalog from Spotify, the main issue being Spotify's free tier. Instead, she released 1989 on Jay-Z's Tidal, a paid service.

Then, in 2015, Apple Music announced three-month free trials with artists receiving no royalties from those free trials, and she was pissed. Apple listened and dished out royalties.

So, Universal Music Group, Swift's distributor, negotiated to allow artists to choose windows of exclusivity for new releases. T. Swift went back to Spotify, and it all seems fine for now, but keep this exclusivity issue on hand for later.

Then the Facebook alliance garnered criticism as new users had no choice but to use their Facebook account to create a Spotify account, which wasn't appealing at all. Spotify eventually yielded. But, then, through Open Graph, activity between Spotify and Facebook became more visible. The songs you listened to now appeared on the revamped feed.

Many articles popped up, explaining how to separate the two programs as much as possible. It seemed people didn't enjoy publicly displaying their guilty pleasures.

And now, let's talk about Apple.

Apple is a big player; we all know that. But it doesn't have all the tricks up its sleeve.

People want to feel unique, and Spotify understood that, so they created the Wrapped year-in-review. Every year, Spotify reminds you of musical genetics, your favorite songs, artists, and podcasts. It also allows you to share your results on Instagram, Twitter, and other social networks.

Apple Music users, on the other hand, can't do quite the same. They do have a year-end summary, but it's not as shareable, or interactive.

Such is the Wrapped success, some Apple Music users questioned their loyalty, and their friends supported the idea.

Here's the exclusivity issue again. Apple Music traditionally worked, to great success, with exclusive content, with artists like Frank Ocean, Drake, and Taylor Swift. Drake even broke several records by having Views album only in Apple Music, except four songs, for a determined period.

But the music industry had a love-hate relationship with exclusivity as it affects revenue. Yes, a launch with Apple means heaps of dedicated marketing, but fewer listeners in the end. Artists like Kanye West criticized this, saying exclusivity was "fucking up the music game."

A game in which Spotify had around 42% market share in the music streaming industry in 2017. And it's not like Spotify isn't willing to work with exclusivity as we have seen. But, this company beats giants Amazon, Google, and Apple. How?

Well, it's about numbers and features. Spotify changed the way people consumed music through several vital elements. It was no longer about one a long-awaited album, but rather a steady flow of unlimited music that appealed explicitly to each listener.

Take the Discover feature, a series of machine-generated playlists, that follows a carefully constructed process in which Spotify takes what you listen to regularly and looks to other users and their listening history to match the songs. Then it navigates the web to gather more information about specific songs and lyrics. Finally, it analyzes the songs you hear to find similar tracks in tempo, beat, and genre.

In a 2017 internal report, Spotify stated that machine-generated playlists comprised more than 30% of all listening activities.

So, Spotify pretty much has figured you out. Don't be shocked if it recommends therapy when you play sad songs over and over again.

2020 has seen the rise of other forms of entertainment have risen due to the lockdown, besides music. One of which is the podcast. On a year-to-year basis, Spotify's podcast mentions have increased by 67% while Apple's rose 45%.

The company's venture into podcasts began in 2015. From the start, it invested heavily. First, in 2018, it opened its Podcasts for Spotify to creators all over the world.

Why open it up? Well, in 2017, Apple had a 55% market share of podcast content. But, it was only available in 20% of worldwide devices. So, the rest of the market is up for grabs.

Then, they invested heavily in purchasing giants Gimlet and Anchor, two relevant podcast networks, for $340 million.

The result: now, Spotify hosts over 1 million different podcasts, more than any other software in the world, users have gone from 131 million in 2017 to 286 million in 2020, and total revenue doubled.

But Spotify came in very late to the podcast game, which had always been under Apple's control. So, what was the difference? According to a Nieman Lab, there are critical differences between the two.

With over 1 million podcasts and advanced AI, the chances of finding other podcasts interesting are higher with Spotify. While with Apple, it's harder for lesser-known podcasts to appear in the Featured section.

Then, there's integration. With Spotify, both podcasts and songs are available within the same app, rather than having two separate apps. Ek's obsession for seamless, integrated, high-quality listening pays off, add to that, the latest A.I and data analysis, and Spotify has a winning combination.

Spotify isn't home free, especially when it comes to money. The famous free-to-paid user churn is still a challenge. They did see profit in 2019, but projections indicated it wouldn't last. And it didn't.

In 2020, so many advertisers withdrew that it failed to meet revenue expectations, and this was a company that didn't rely entirely on ads. Their average revenue per user also declined 9% year-to-year.

Some experts consider this decline is due to the company's expansion to markets in which it charges less per month. But, they also warn that ad revenue will be critical for Spotify. As they focus on podcasts, which are free for all users, ads become a big part of their business.

Then, there's the technological side to it. Yes, Spotify is at the forefront of AI and user experience, but competition is getting stiffer. All those big names are trying to catch up.

But Spotify has an ace up its sleeve. Yes, they dominated music. Now, they're going after the video market. Both free and paid users will now be able to watch videos from select podcast creators, contrary to YouTube, in which only paid subscribers can enjoy such content.

For users, it means more content for creators, more options. For the competition, it's yet another challenge.

For now, Spotify knows us too well. And that's bad. But, perhaps they have a song to make us feel better. So, what's your favorite app to listen to music and podcasts?