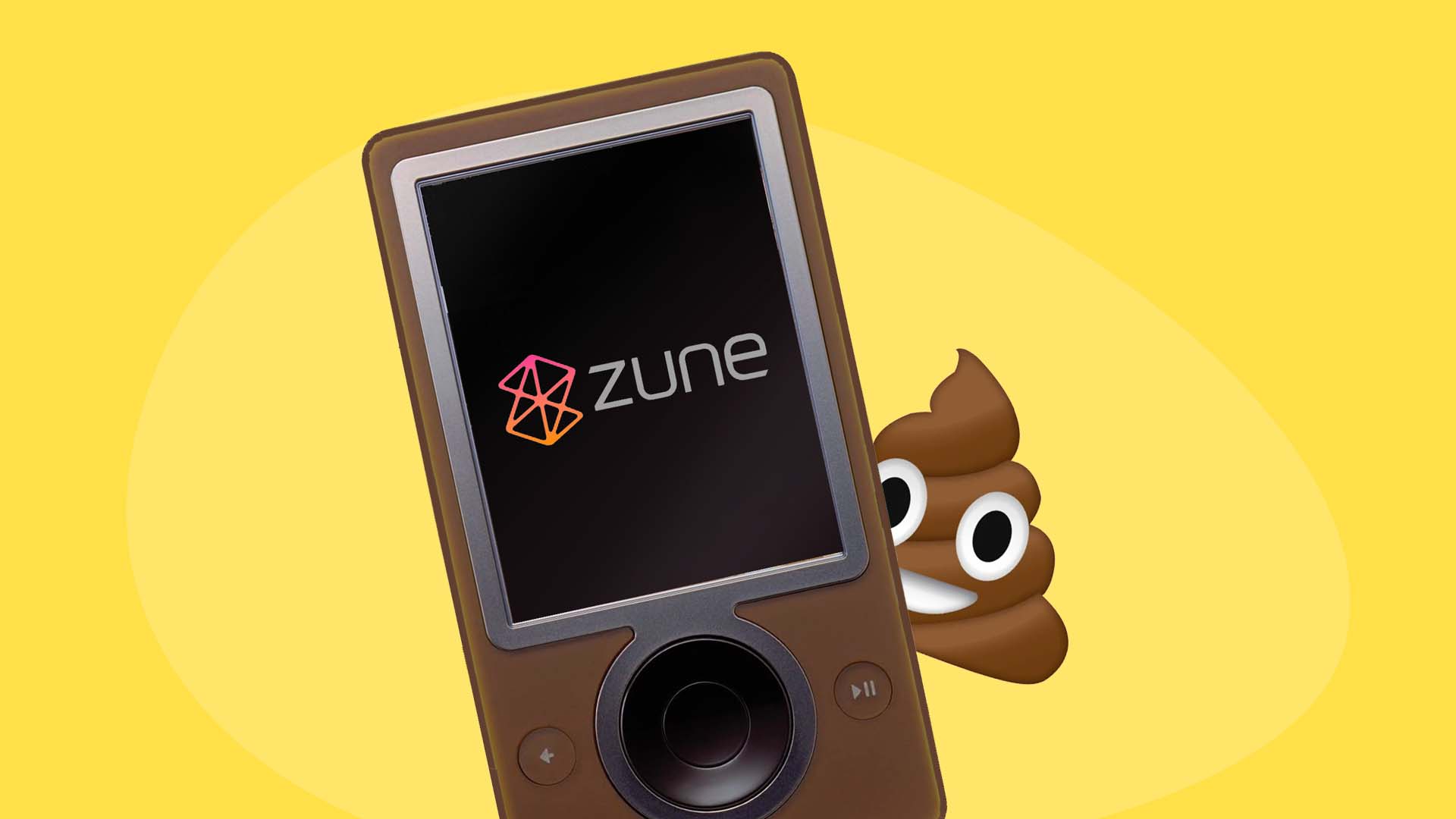 Zune: How Microsoft let Apple take over the world

Zune: How Microsoft let Apple take over the world

If you want to challenge the number one in any market, you need to have a good, rather an excellent product. But, most importantly, you need to believe in what you are bringing to the table. If not, you're doomed.

In the mid-2000s, Microsoft was riding high on the successful Xbox and established itself as the leading software for PCs. So, to them, it seemed natural to take on and dominate another market: mp3 players. But they were up against the iPod.

To win, they needed to have all the parts of the equation right from the start. They didn't: what followed was an embarrassing attempt at being cool, with odd mistakes and even more unusual colors. We'll tell you all about that other mp3 player, the Zune, in this Company Forensics.

Ever since iTunes was born, Microsoft tried to copy it. In 2004, it created MSN Music to compete, but the idea was short-lived. Two years later, Microsoft shut it down and launched the Zune service.

First, there was one big elephant in the room: it was brown. Poop-brown. Let me give you a moment to think about all the devices you currently use with such a color.

Still, Microsoft felt "brown was the new black." That's not the title of a new, highly controversial Netflix series. They truly believed that this color would be hip. The rest of the world thought otherwise.

At least, to a tiny population, the device's uniqueness, including the color, seemed to have worked. The Zune garnered a certain cult-following from the start.

Cult-following, however, doesn't take a product to the number one spot. And what happened next, didn't help either.

Let's be clear. Reviews were adequate. The device worked well, had extras like FM radio and wi-fi capability, albeit limited. Overall, users and testers alike considered Microsoft's first try as a good one.

Well, no. Not everyone.

But behind the jokes, there's truth. It was late 2006, early 2007, and Apple was working on something more significant: the iPhone. The iPod had already established itself as the go-to mp3 player. Yes, people want to support the underdog, but sometimes, they also want to watch it fail.

Then there was the launch date. Microsoft came out with pots and pans banging to launch the Zune, one day AFTER Apple had announced its fifth-generation iPods with storage capacities ranging from 1 GB up to 80GB, and tons of extras. Talk about bad timing.

Again, it became the target of jokes.

Like we said, overall, the Zune's performance wasn't bad, and more options were available. From the Zune 30 in 2006, the company expanded the Zune array with models like the smaller 4, 8, and 16 GB versions, and eventually the bigger 80 GB and 120 GB versions.

And when it launched, it reached number 2 in portable media device sales within its first week.

It does until you look at the numbers: during that same time, Apple was selling about 3.5 million iPods per month. So yeah, Microsoft sat in second place, but miles, miles away.

It's not all bad, however. Microsoft sold 2 million Zunes in less time that Apple sold 2 million of its first iPods. But back when the iPod launched, the market was packed with cd players and bulky cases. Remember those days?

Then, New Year's Eve 2008 happened: the day when all Zune 30s went on strike. The device's internal clock wasn't ready for leap years, so on December 31st, 2008, the Zunes froze. They stopped working.

Microsoft's answers seemed amateurish. The haphazard solutions included waiting until January rolled along and letting the batteries die out.

But, in 2009, came Microsoft's piece-de-resistance: the Zune HD. With elegant design and outstanding build quality, the HD seemed to check all the boxes. For the time, its screen worked wonderfully, and, through the Zune market, you could rent movies and shows. They tried to lure users with the subscription model, which gave access to tons of media for a flat fee, contrary to the iTunes pay-per-song model. But we'll talk about this later.

Some critics have looked back and said the Zune was far better than the iPod.

But all reviews spoke of one factor in common, a trait so overwhelmingly obvious, buyers couldn't walk past it.

The Zune was good. But not enough. It came with a small vial of dissatisfaction; buyers knew that there was something out there that already did most, if not all, and better. Products like the Zune need to do two things: they either fill a gap in the market, or they are so radical, they dominate.

The Zune did neither.

In all fairness to the device, since its birth, the Zune faced adversity. The first generation battled the fifth generation of iPods, which had accumulated years of learning, mistakes, and improvements. Even their top product, the Zune HD, came two years after Apple released the iPod touch.

In tech, one year is too long. Two are an eternity.

Yet experts have said that if Microsoft had released the Zune before the iPod, it would've been a hit. It might've been, we'll never know. But it means very little now when we look back at its blundered history.

Remember the Zune market? Well, it wasn't perfect. It proved to be deficient. In the end, the subscription system proved to be expensive and confusing. Users felt frustrated with the credit system in which they bought Zune Points, then exchanged them for media, unaware of how much each song or movie cost.

Then there's Microsoft itself. From the start, the company didn't seem to believe in the product.

In an interview with Business Insider, Robbie Bach, the former Zune leader at Microsoft, candidly recalled that Microsoft's attitude was wrong from the start. The Zune convinced no one that it was the go-to device, and it launched at a time in which smartphones were taking over.

‘’The portable music market is gone, and it was already leaving when we started. We just weren't brave enough, honestly, and we ended up chasing Apple with a product that actually wasn't a bad product, but it was still a chasing product, and there wasn't a reason for somebody to say, oh, I have to go out and get that thing.’’

Bach highlights another critical aspect: the lack of adequate marketing around the Zune. There was no spice to justify the brown color, and ad campaigns didn't target the right audience if there ever was one. Plus, the ads themselves, according to Bach, confused potential buyers.

But Bach doesn't keep all the blame on himself. He criticized the music industry and how it had grown dependent on Apple. They were "hooked" on the Apple drug. But, I wonder if he would've said the same if things were the other way around.

Even giants like Microsoft can come up with the wrong answer and offer too little, too late, all of a flawed puzzle.

Zune's death was anything but a surprise. But if you think the Zune is a thing of a distant past, well it isn't. The last Zune rolled out in 2011, and its DNA persisted in another device.

And that device is the Windows Phone. The Zune's interface was so user-friendly that Microsoft decided to use it as a base for their phone's OS and other projects.

Those projects were the Microsoft Surface tablet and a particular operating system called Windows 8.

But, the cycle repeated itself. Zune's offspring were just as bad. Just as flawed. Like a family tree of talented individuals born just a bit too late, Microsoft's attempts at breaking new grounds always come up short.

We all know what happened to the Windows Phone. Well, no. Most of us don't, because, like most Microsoft products aimed at battling with Apple, people weren't interested. It just disappeared.

The Microsoft Surface is the same story. It was battling the iPad, of all things, a couple of years too late. It was a lost battle from the start. Then, there's Windows 8. While, as an operating system, we can't say anything bad about it, we can't say anything good, either. It survived under the radar, relegated to office spaces and home users who didn't have a choice but to use it. In this case, that's a good thing.

As for the device itself, some Zunes still survive, believe it or not. You can buy them on Amazon and join the select few aficionados who still use them. Some have even tattooed their love for the device, but we recommend against that.

In the end, the Zune was good. It just came at a time when being good wasn't enough. But it did leave us a lot of lessons: if you want to change the consumer world, you better have an excellent idea and believe in it. Also, be sure it can tell time and, just don't paint it like poop.